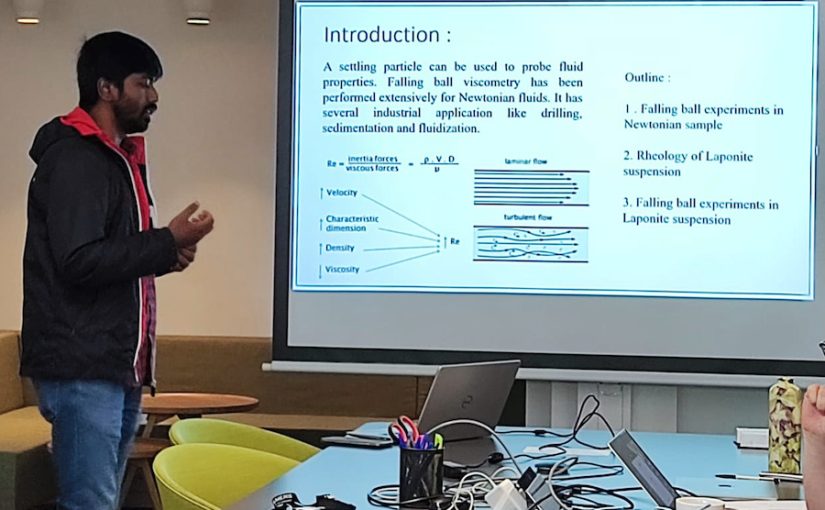 Optical tweezers (OT) can be employed to measure pico-Newton forces acting on a colloidal particle trapped in a medium and have been used to successfully probe complex systems having fragile structures. In this work, we use an optical tweezer setup to study aging aqueous suspensions of Laponite clay particles of different concentrations. Laponite particles in aqueous suspension form fragile networks whose rigidities grow with time due to the gradual evolution of inter-particle electrostatic interactions. Using OT, we study the displacements of a trapped micron-sized colloidal bead in a Laponite suspension medium during the evolution of the underlying structures. By analyzing the power spectrum, we demonstrate that the viscosity of the aging Laponite suspension increases with time. Furthermore, we perform active micro-rheology experiments wherein we apply a sinusoidal oscillation to the sample cell while keeping the particle trapped in the Laponite suspension. Simultaneously, the force response of the trapped particle is recorded during the controlled applied oscillation. The phase lag between the applied oscillatory signal and the force experienced by the trapped particle due to the oscillatory deformation is calculated. A range of frequencies is applied to estimate the elastic (G’) and viscous (G”) moduli of the Laponite suspension over a broad range of time scales and at different suspension ages. It is found that G’ is lower than G” at the lower frequencies and eventually crosses G” at a frequency that depends on the Laponite concentration. We change the size of the trapped particle to study how the probe particle size affects the micro-rheological measurements of the viscoelastic gel-like medium. We next investigate the concentration- and aging-dependences of the fragile structures in Laponite suspensions of different concentrations using cryogenic electron microscopy. The average pore areas of these structures are seen to decrease with increasing Laponite concentrations. We show that the crossover frequency of G’ and G”, obtained from micro-rheological measurements, is proportional to the average diameter of the pores in the Laponite gel measured using electron microscopy.

Short Bio
Rajkumar Biswas is currently doing his PhD in Raman Research Institute (RRI), India. Before joining RRI in 2016, he completed his bachelor’s and masters in Physics from St. Xavier’s college, Kolkata and Indian Institute of Technology, Guwahati (IITG) respectively. In RRI he is working in the Soft Condensed Matter group with Prof. Ranjini Bandyopadhyay. His research focuses on rheological and dynamical properties of different soft matter systems. He has worked on various projects which includes rheological studies of Laponite gels using falling ball viscometer and optical tweezer. Along with that, he has been studying the dynamical heterogeneities in colloidal and granular systems.