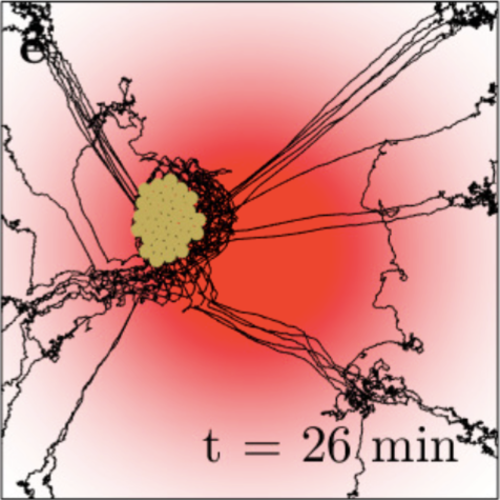 Self-organization entails the emergence of complex patterns and structures from relatively simple constituting building blocks. Phenomena such as flocking of birds and growth of bacterial colonies are examples of self-organization in nature. Also artificial microscopic systems feature similar forms of organization with the emergence of clusters, sometimes referred to as “living crystals”. In the past two decades, studies on self-organization focused on systems made of complex colloids with anisotropic surface, such as Janus particles. Depending on their surface material properties, Janus particles have been used in different fields for various applications such as self-assembly, microrheology and emulsion stabilization. Under certain conditions, Janus particles have the ability of self-propelling and behave as active Brownian particles; these active Janus particles might be used in future biomedical nano-devices for diagnostics, drug delivery and microsurgery. Studies on clustering of Janus particles have been performed by Palacci et al., who have shown the formation of living crystals in systems of light-activated Janus particles (Fe2O3-TPM) in hydrogen peroxide solution. Similarly, Buttinoni et al. demonstrated the clustering of light-activated Janus particles (carbon-SiO2) in a water-lutidine binary mixture. Other research groups have shown self-assembly and controlled crystal formations in a mixed system of light-activated Janus particles and passive colloids. In all these studies, a necessary ingredient for the clustering is the active nature of the particles. In systems of passive colloidal particles, crystallization was observed at the bottom of an attractive optical potential, close to the hard boundary during electrophoretic deposition, and in the presence of an external temperature gradient.

Here, we investigate the behavior of a system composed of Janus particles (silica microspheres half-coated with gold) close to a planar surface in the presence of an optical potential, and we experimentally demonstrate reversible clustering triggered by the presence of the optical field. Experimental results are compared and validated by numerical simulations, where the key ingredient for clustering is the presence of an attractive potential of hydrodynamic nature. In fact, the temperature gradient generated by the light absorption at the metallic patches on the Janus particles induces a local force field tangential to the surface of the Janus particle, which causes the fluid to slip at the surface of the particle. Because of the proximity of a planar surface, the flow pattern around the Janus particle is squeezed and results in a flow with a horizontal incoming radial component (parallel to the planar boundary) and outgoing vertical components (directed upwards from the wall). This thermophoretically-induced flow field affects the motion of other neighboring particles, so that a second nearby particle experiences an attractive hydrodynamic drag force toward the particle originating the flux. Clustering is confirmed also in mixtures of Janus particles and passive colloids (silica microspheres), where the hydrodynamic flux due to the Janus particles causes the clustering of the particles in the hybrid system and the formation of living crystals. As a further confirmation that the presence of Janus particles in the optical potential is crucial for the clustering, we show that a system with only non-Janus particles does not give rise to any clustering. We show experimentally that the clustering process is reversible, since the cluster starts to disassemble as soon as the optical potential is switched off.

Beyond their fundamental interest, the reported results are potentially relevant for various applications in the fields of self-assembly, targeted drug-delivery and bioremediation. For example, the possibility of forming clusters at a controllable distance from the minimum of a potential well offers a new route towards self-assembly near a target. Future work will be devoted to understanding how the clustering behavior can be controlled or altered by using more complex optical potentials.

Self-organisation is driven by the interactions between the individual components of a system mediated by the environment, and is one of the most important strategies used by many biological systems to develop complex and functional structures. Furthermore, biologically-inspired self-organisation offers opportunities to develop the next generation of materials and devices for electronics, photonics and nanotechnology. In this work, we demonstrate experimentally that a system of Janus particles (silica microspheres half-coated with gold) aggregates into clusters in the presence of a Gaussian optical potential and disaggregates when the optical potential is switched off. We show that the underlying mechanism is the existence of a hydrodynamic flow induced by a temperature gradient generated by the light absorption at the metallic patches on the Janus particles. We also perform simulations, which agree well with the experiments and whose results permit us to clarify the underlying mechanism. The possibility of hydrodynamic-flux-induced reversible clustering may have applications in the fields of drug delivery, cargo transport, bioremediation and biopatterning.