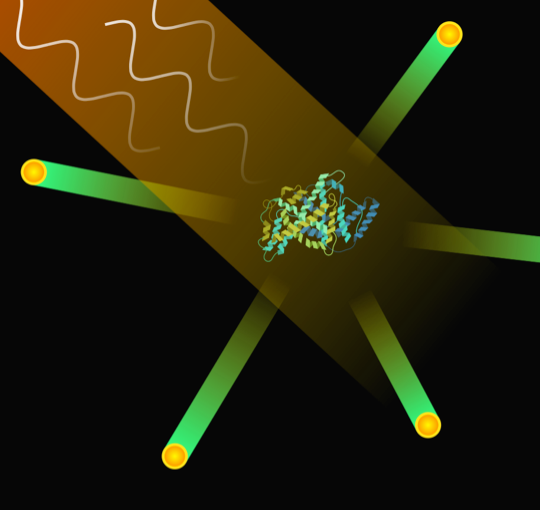 Gustaf Sjösten defended his Master thesis in MPCAS at the Chalmers University of Technology on 17 May 2021. Congrats!

A novel technique for label-free, real-time characterization of single biomolecules called Nanofluidic Scatter Microscopy (NSM) has recently been developed by the Langhammer research group at Chalmers. We have created a machine learning (ML) framework consisting of deep convolutional neural networks such as U-nets, ResNets and YOLO in order to characterize single biomolecules through kymographs collected through NSM, as an alternative approach to a standard data analysis method (SA). As a laser irradiates visible light onto single biomolecules freely diffusing in solution inside nanofluidic channels, the biomolecule and the nanochannel scatter light coherently into the collection optics, such that the nanochannels improve the optical contrast of the imaged biomolecules by several orders of magnitude. A video of the total scattering intensity is then recorded with a high frame rate camera (capturing 200 fps) in order to capture the movement of the molecules as well as the optical contrast of the biomolecules with respect to the nanochannel. From the movement of one single biomolecule, it is possible to predict its diffusion constant, which can then be used to infer the hydrodynamic radius of the biomolecule. Additionally, the predicted optical contrast of one single biomolecule can in turn be used to infer its molecular weight. From the combination of hydrodynamic radius and molecular weight, information about the conformal state of single biomolecules can be inferred. In this thesis, we show that the ML approach yields results comparable to the SA which was developed independently of the ML technique for biomolecules in the weight span 66-669 kDa, and we also show that the ML technique is superior to the SA in other regards, such as computational speed and potential to characterize smaller molecules. The results of the data analysis performed with the ML framework will also make an appearance in the first paper on the NSM technique which has been submitted for publication and is currently under review.