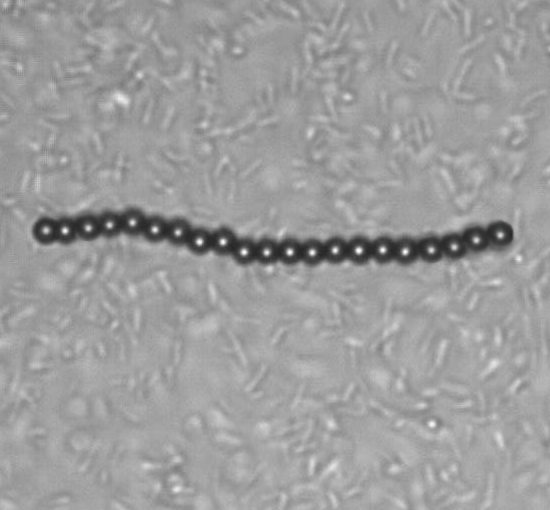 Anisotropic macromolecules exposed to non-equilibrium (active) noise are very common in biological systems, and an accurate understanding of their anisotropic dynamics is therefore crucial. Here, we experimentally investigate the dynamics of isolated chains assembled from magnetic microparticles at a liquid-air interface and moving in an active bath consisting of motile E. coli bacteria. We investigate both the internal chain dynamics and the anisotropic center-of-mass dynamics through particle tracking. We find that both the internal and center-of-mass dynamics are greatly enhanced compared to the passive case, and that the center-of-mass diffusion coefficient D features a non-monotonic dependence as a function of the chain length. Furthermore, our results show that the relationship between the parallel and perpendicular components of D is preserved in the active bath compared to the passive case, with a higher diffusion parallel to the chain direction, in contrast to previous findings in the literature. We argue that this qualitative difference is due to subtle differences in the experimental geometry and conditions and the relative roles played by long-range hydrodynamic interactions and short-range collisions.