Abstract: Photophoretic forces, which are derived from the momentum exchange of absorbing particles with surrounding fluid molecules, are especially useful for trapping particles in air, where their very large magnitude (about five orders more than optically induced dipole forces) successfully balances gravity. Thus, particles levitate in the direction of gravity, while in the transverse direction, they are trapped by a restoring force emanating from the rotation of the particles around the trapping beam axis. Photophoretic forces thus enable the use of single optical fibers for stable three dimensional traps. In this talk, I shall describe our efforts to develop such single fiber based traps, where we find that a single mode fiber is not necessarily the most efficacious in terms of trapping. Robust trapping is achieved when the off-axis intensity of the trapping beam is high, so that rather unexpectedly, we observe that a single multi-mode fiber allows much stronger trapping in general, and especially in the radial direction compared to a single mode finer. We are able to trap particles at extremely low laser powers (around 5 mW) in air, and can manipulate printer toner particles of diameter less than 20 microns at translation velocities of 5 mm/s in our multi-mode fiber trap. Particles can be manipulated by merely changing the power in the trapping beam, which accentuates the power and promise of this technique as a possible candidate for single fiber-based hand held tweezers for confining and even spectroscopically analysing aerosols or pathogens present in the air.

Bio: Ayan Banerjee has been working in the field of optics and spectroscopy for the last 22 years. He obtained his Ph.D in physics from the Indian Institute of Science, Bangalore, following which he was a research scientist at General Electric Global Research, Bangalore, India. Since 2009, he has been an associate professor of physics at the Indian Institute of Science Education and Research (IISER), Kolkata. His research interests span a wide range of subjects in optics and spectroscopy. At IISER, he has set up an optical tweezers lab to study diverse problems in a truly interdisciplinary mode of research. 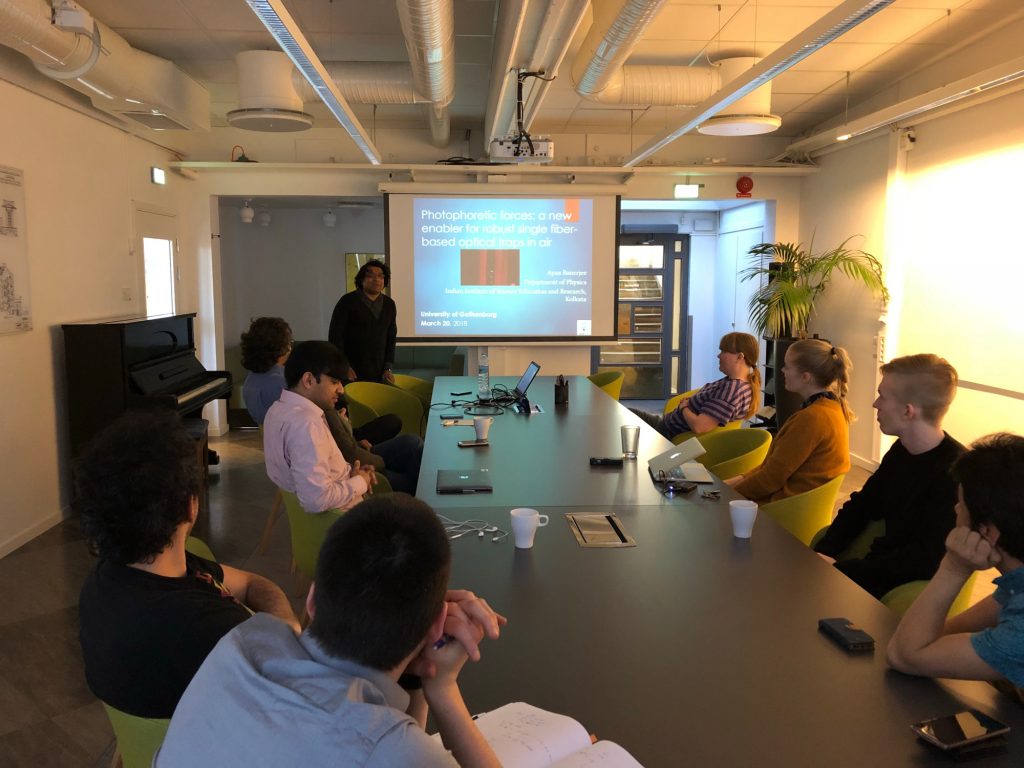