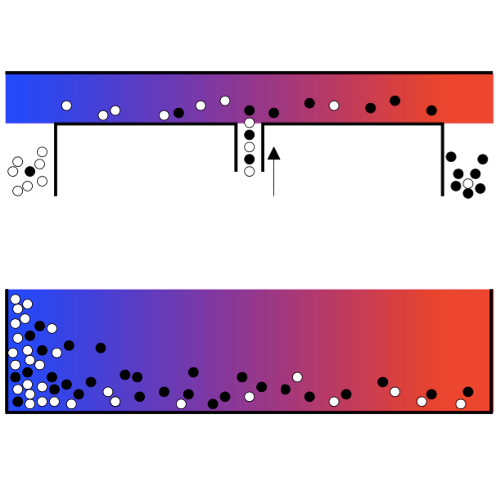 Brownian motion of microscopic particles is driven by collisions with surrounding fluid molecules. The resulting noise is not white, but coloured, due, e.g., to the presence of hydrodynamic memory. The noise characteristic time-scale is typically of the same order of magnitude as the inertial time-scale over which the particle’s kinetic energy is lost due to friction. We demonstrate theoretically that, in the presence of a temperature gradient, the interplay between these two characteristic time-scales can have measurable consequences on the particle’s long-time behaviour. Using homogenization theory, we analyse the infinitesimal generator of the stochastic differential equation describing the system in the limit where the two time-scales are taken to zero keeping their ratio constant and derive the thermophoretic transport coefficient, which, we find, can vary in both magnitude and sign, as observed in experiments. Studying the long-term stationary particle distribution, we show that particles accumulate towards the colder (positive thermophoresis) or the hotter (negative thermophoresis) regions depending on their physical parameters.