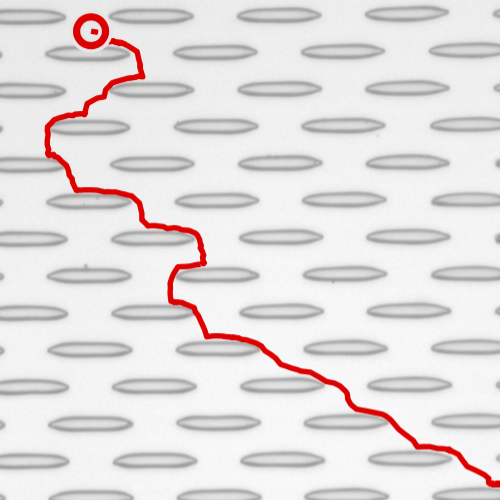 Tiny self-propelled swimmers capable of autonomous navigation through complex environments provide appealing opportunities for localization, pick-up and delivery of microscopic and nanoscopic objects. Inspired by motile cells and bacteria, man-made microswimmers have been created and their motion in homogeneous environments has been studied. As a first step towards more realistic conditions under which such microswimmers will be employed, here we study, experimentally and with numerical simulations, their behavior in patterned surroundings that present complex spatial features where frequent encounters with obstacles become important. To study the microswimmers as a function of their swimming behavior, we develop a novel species of microswimmers whose active motion is due to the local demixing of a critical binary liquid mixture and can be easily tuned by illumination. We show that, when microswimmers are confined to a single pore whose diameter is comparable with their swimming length, the probability of finding them at the confinement walls significantly increases compared to Brownian particles. Furthermore, in the presence of an array of periodically arranged obstacles, microswimmers can steer even perpendicularly to an applied force. Since such behavior is very sensitive to the details of their specific swimming style, it can be employed to develop advanced sorting, classification and dialysis techniques.